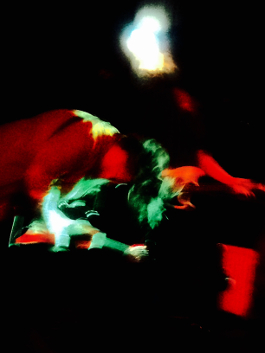 Apologies to the other bands playing tonight at The Richmond but an early start on the following day combined with the willful obtuseness of Thameslink trains meant that tonight’s review was in relation to the first two bands on the bill, Grand Guru and BELLYDANCER. As an aside, keep your eyes out for other band nights at The Richmond on Thursdays.

Grand Guru, coming across like the bastard love child of Robert Johnstone and a million black metallers tore those in attendance a new hole. Growling, howling and a pointing whilst playing the guitar and giving his bass drum a kicking his sound is akin to the blues but filtered and distorted through thunder and lightning so it pulses and thrashes to a cacophony. The old new if you will. New material is imminent so hopefully more shows to accompany it.

BELLYDANCER, a band new to me live but acquainted with via their Bandcamp recordings. The Birthday Party meets Suicide is a reference point to their sound. A duo with accompaniment via drum machine the sound is heavy with a surf/retro tinge to it. Whilst their stagecraft is different to that of Grand Guru, the wall of sound they make is their stagecraft. Whilst a drum machine may seem to be a limiting instrument as its pre-programmed, BELLYDANCER harness its rhythm to thrilling effect.

See both bands sooner rather than later!