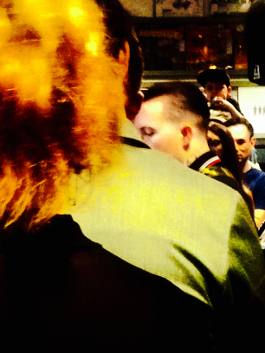 For their latest album, Slaves undertook a series of In-Store performances. This, the first gig of their mini-tour and acoustic too was a six-song set which focussed on the gentler, more reflective songs of Acts of Fear and Love. Having seen them from within the mosh pit at their Green Door Show a couple of years ago it was different to hear them denuded from volume but arguably this served their new material better. Jokes and flapjacks were shared between songs and it was a mellow experience all around.

A more mature Slaves but still with a glint of mischief in their eyes. The new album itself is a better blend of the heartfelt and angst than their second album which in part they have disowned in recent press quotes as a misstep. They’ve hit their stride and it’ll be interesting to see where they go for album four. Back to their punkier roots or something else?