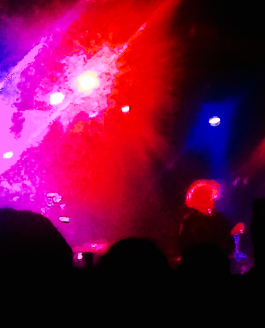 Two heavyweight names from the American underground going back to the 80s. Melvins, the fathers of sludge and grunge and Jon Spencer, cool blues/rock n roll songsmith. Despite a blustery, cold night made more so by The Concorde 2s location on the seafront and ticket prices which were towards the top end of what you’d want to pay, the venue was still packed and the merch table was doing a steady trade. After beer and t-shirt purchases it was time for the music.

Jon Spencer and the umpteen bands he’s led and/or been in take that cool blues/rock n roll hybrid and make it sexy and dirty. Promoting a new solo album, Spencer Sings The Hits, Jon Spencer solo isn’t much different from Blues Explosion, so the tunes were cool as was Jon.

Melvins were in their current configuration of a quartet with two bass players as was the case for the current album., Pinkus Abortion Technician.  Thunderous from the off they maintain this to the end.  Cacophonous riffs were the order of the day with the two bassists adding monstrous low-end too.

Two different acts but with a shared heritage. Melvins still the masters of volume and riffage and Jon Spencer, the underground rock n roll blues man. Despite both being totems from the 80s underground they are still vital live acts in 2018.