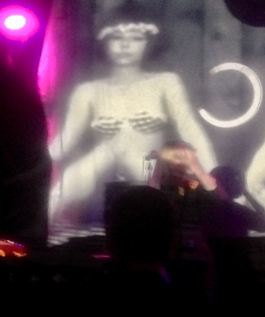 Gaining favourable coverage from the music press for their album Psychic Data, TVAM has been praised for their vaporwave meets post-punk sound. Familiar yet disconcerting, it pushes buttons and opens rabbit holes into your memory which are familiar and strange.

Openers Echo Ladies have their own Eighties reference points in Echo and the Bunnymen Shoegaze and Cocteau Twins. Including a Bowie cover in your set, Rebel Rebel can be viewed as a bold move or an annoying one. To their credit, they slowed it down to make it in keeping with their other songs. The group is comprised of a female singer with two guitarists with drum machine/electronics backing. At times felt like the guitarists were miming along to a backing track but this is a small point about a band I’m sure we will hear more of.

An electronic meets rock sound can be difficult to realise in the live arena. TVAM the touring entity is a two-piece band. TVAM make it work with guitar lines which range from crunching to angular alongside an Eighties electronic meets Post-Punk sound. They played most of the tracks from the album Psychic Data with a few older tracks from earlier single/ep releases It was a performance where the cathode ray tube was the front man and the humans were doing its bidding…

The visual aspect of the band live can’t be underestimated as the videos that are displayed via a large television similar to those from school assemblies placed in the centre of the stage converge into a VHS dystopia as images degrade, merge and distort. The familiar becomes twisted and ultimately new. TVAM is a half-remembered memory which when recalled is not what it seems, whether good or bad it’s made real. One of the best gigs in Brighton in 2018.