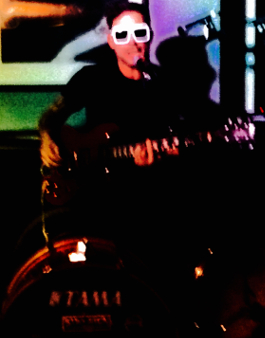 Punk is here to save the day or at least Saturday night. Starting off proceedings as he’s done on numerous occasions is Young Francis. He is the reigning Brighton Party Starter and the crown remains firmly his on the basis of tonight’s performance. A down and dirty twenty-minute set was what we got today with two new songs debuted. The songs are short sharp sugar-coated bullets. Ramones meet bubblegum pop is the order of the day.

Glitter Piss, a new band but with familiar faces from the Brighton punk scene. Punk n Roll is their thing. Sticking mainly to songs from their demo and a couple of Hellacopters/The Damned covers they play hard and fast. The covers won’t be needed soon as their own material is that good as upstairs at The Pipeline became standing room anyway let alone only. New Turks on the ascendancy.

Rotten Foxes are as rascally as ever. Riffing (pun intended) on subjects including work, beer, and mullets. A post UK82 sound which is crunchy and serves well to showcase the band’s lyrics. Singer Rhys is a whirling dervish throwing himself into the crowd and back onto the stage. Bonus points for bassist’s Jimi hair, the best in the Brighton music scene. They were in fine form tonight.

Missed The Spitters but from all accounts they were great. Support local promoters and small venues. Punk begins at home. Use it or condemn yourself to a lifetime of The Voice. You decide!