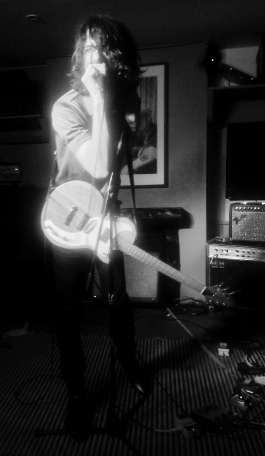 Five acts with one thing in common. They are one i.e single acts. Kicking off proceedings is Miffy. An acoustic act who’s punk songs are different due to their musical setting. With only a short time, it would have been nicer to hear more of her own songs than the covers played. One to watch. La Paquena Em. A masked ukelele player playing troubadour covering songs, both punk, and pop. Bonus points awarded for the ‘Sharknado‘ sing which included a costume change and audience participation. A masked gem you should seek out. Young Francis has added new songs to his set to keep it fresh. He’s muscular bubblegum meets garage pop sits well in the middle of this bill. Recommended.

If Suicide had defied biology and had a baby, it would be Grand Guru. The Guitar wailed, he roared and drum tracks spluttered and clacked behind him in rhythmic disharmony. An electronic meets garage with nods to industrial sound is what Grand Guru delivers. If you like the sound of this, check out the album, garagepunk2999. A flamenco enthused punk is a description of –Nestter Donuts. A force of nature where fluids of human and other origins are expended and shared is as true. He played, danced, dry-humped around the room as though possessed by a playful demon. The music itself comes across like a European Spaghetti Western soundtrack reimagined for guitar and drums. A live experience that everyone should have. Visceral!

Five acts. All different but unified by taking punk as a starting point and going off in many directions, some odd, some more familiar but all worthy of your time.