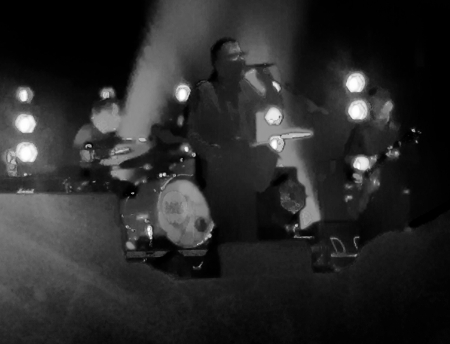 The record hot humid weather in Brighton caused a rip in the space/time continuum on the last Friday in July and those entering Brighton Racecourse on this night were thrown back in time to a period I’ll call 99/09. An era just after the Britpop years but sharing similar tropes in terms of fashion and music.

Adidas trainers are the preferred footwear, bucket hats are numerous and the bands playing were at their peak of popularity.

All can be categorised as Rock but each of them coming to it from different angles with differing influences.

Since announcing their comeback late last year after nearly a decade away Doves have ridden a wave of goodwill and have hit the festival circuit with a vengeance. The heavens opened as they strode onto the stage offering a respite from the wall of humidity enveloping the city for the last few days. Vocalist and bass player Jimi Goodwin comes across as the most sincere and humble front-person in rock. Asking how we were and asking for the main lights to come on so he could see us, added to a feeling of communion. Jez and Andy Williams with live band member Martin Rebelski complete Doves tonight and are a muscular band but with a subtlety of touch so the music is strong but without resorting to rock cliche.

In their earlier dance music days as Sub Sub, the funky sensibility of Doves music was learned which added to an indie rock sound gives them a sound which is nuanced and powerful but yet moveable to in the main. Black and White Town is based on a Motown groove for example. Warmth is the word that is the best descriptor for their set and for the band. Euphoric without being cliched, they sidestep the obvious to make music which is uplifting. After eighty minutes they were done but the heavens still weren’t and it was time to make a bedraggled but very happy way home. Thank you Doves.

Main support band Feeder is best known for perhaps one song. You know, that one goes CD Player, Player!

To allay any fears, yes they played Buck Rogers and like The Coral, they played their best/favourite song early in proceedings.

Taking 90s Indie and Grunge and adding singalong pop hooks, this template has served them well.

Arm-waving, light-hearted moshing and hugging were the order of the day. As well as playing singles from their back catalogue they played two tracks from their forthcoming album Tallulah.

After all that bouncing, I needed a restorative sitdown. Job well done. 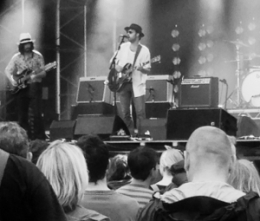 The Coral were on before Feeder and the crowd started to build as people had left their offices and managed to wind their way to the top of the city despite the best efforts of Brighton’s traffic system to frustrate them. The psychedelic scousers are best known for In The Morning which they play early in their set. The set veers from sunshine pop to harder psych-rock. A longer jam-style track during the middle of the set doesn’t feel right in this mini-festival setting and a few people seek refuge at the bar whilst it lasted. Barring this, the retro vibes were strong and vibrant and toe-tapping and head-nodding were in evidence.

Openers The Twang started proceedings with a fun, people-on-their-feet, bouncy lad rock sound with bits of early 80s alternative rock (U2/Simple Minds) evident too. With two female backing singers adding contrast to vocalist’s Phil singing, it was a good start to the show. Bonus points awarded for Phil’s consumption of ‘cheap potato vodka’ adding to his forgetting the opening line of the band’s final song. Whether schtick or otherwise, it went down well, like the bargain spirits.

It was nice to wallow in nostalgia for a night but better yet that all four acts were looking forward with new material ready or upcoming shortly. Now if we can get beer and burger prices back to early 2000s levels.