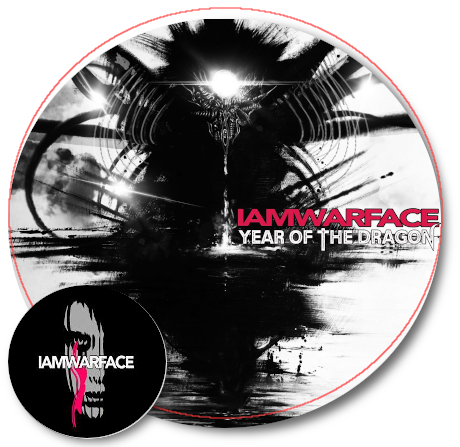 In Chinese culture, Year Of The Dragon donates good fortune and for fans of Electro Rock, you are most fortunate as IAMWARFACE have delivered an album for you.

Guitars grind, synths shimmer and drums rumble. Vocalist and band main man Matt Warneford vocals range from throat-shredding screaming and wailing to gentle almost beautiful singing. Lyrically, the songs are concerned with longing and lust in addition to other universal themes such as fear and where society is heading.

Of the ten tracks present (excluding the four remixes) the strongest/best is opener Say My Name which starts the album with a bang. The remainder of the album rocks and rolls with big basslines, propulsive percussion, guitars which issue dirty riffs and synths which at times are industrial in strength. The remixes are a nice additional touch to a strong vibrant release.

Fans of Muse, latter period Gary Numan and Depeche Mode have a new band to enjoy. 2019 is the Year of the Pig but for Electro Rock Fans it’s very much Year Of The Dragon.

Year Of The Dragon is released on 6th September via IAMWARFACE.COM
Facebook link: Iamwarface