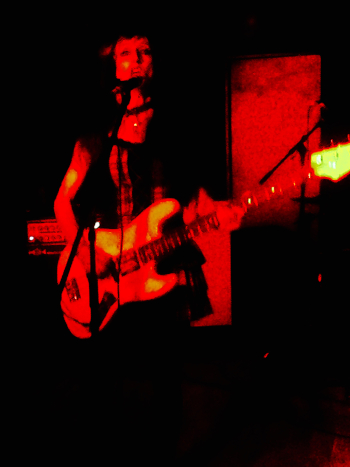 Scare Taxi will be a new band to many but contain in their ranks (pun not intended) Alexander Boag, from 90s miscreants These Animal Men in addition to Tara Hartley with Jonny 8 Track on drums. Tonight’s show was to launch their new album Death By Music. Self-described Trash rock is the order of the day.

High Action/Full Octane from the get-go, Scare Taxi was a joy to watch. A couple of late 70s/early 80s classics (Tainted Love and The Model) were added to the set and whilst crowd-pleasing, their own songs are strong enough to not be required.

Boag was the ringmaster tonight for the show spinning around the stage whilst providing vocals and riffs. The rhythm section of Hartley and Jonny 8 Track were tight and enabled Boag to be the focal point for the group. A packed Latest Music Bar was a testament to their appeal. Go see them and go listen to the album!

Main support Idle Bones has become a mainstay on the local punk circuit with their goth infused punk n’ roll with a twist of rockabilly thrown in for good measure.

Dark tales set to catchy music. Bonus points awarded for bass player Steve’s energy. He galloped across the stage. I want to know what his brand of coffee is! A new ep is imminent. If you’ve not had this ghoulish pleasure, come on over to the dark side sooner rather than later.

Between the two supporting acts, we had the debut showing of Scare Taxis’s video for the track Lunacy. An animated treat worth seeking out.

Jonny 8 Track opened tonight’s gig (and also drummed for our headliners) with a toe-tapping country-inspired set.

Scare Taxi delivered a great evening of music ably supported by Idle Bones and Jonny 8 Track. Death By Music? Well, there are worse ways to go I’m sure.