For once this well-trod path has lead to redemption, personal and musical. Blazing hard and fast in the 90s with their sweet punk meets riff-heavy rock cacophony they succumbed to poor choices and bad luck and we’re on the skids later in the decade. Various line ups followed but the classic 90s line up is back with an album, Renaissance Men and mini-album, Diagnosis released this year.

Kicking off the set with Diagnosis the lead track from the mini-album they rocked hard from the start. I can’t stress this enough. They rocked HARD. Guitars smacked you ’round the head whilst catchy call and response lyrics offered a poppier counterpoint. Over nearly twenty tracks, we got the ‘hits’, album cuts, b sides (remember them?) and new material from this year’s releases.

Living hard and fast has left its mark on the band but if you closed your eyes, 2019 doesn’t exist but we’re in 1995. Problems are less, waistlines are smaller and hair is in the right places.

That’s not to denigrate the band as a nostalgia act. Whilst The Wildhearts come from the 90s and for most that’s why they buy a ticket, the new material stands toe to toe with their past. Go see The Wildhearts for past thrills and future fun. As an aside, poppers or room odourisers (I know I’d like my abode to smell like arse and sweaty socks, don’t you?) were popular in the pit for this gig. As one guy found out when moshing with a small glass bottle of the whiffy water in his hand, a stray arm brought its demise and a localised hit of the aforementioned Eau de bottom for all to endure/enjoy. Poppers in the pit. Sounds like a Wildhearts song. What about it Ginger? 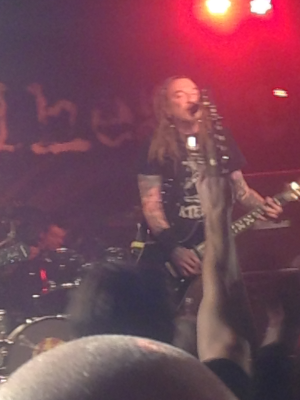 Sing-along-a-punk is the order of the day with a dollop of cheeky chat courtesy of Mr Spencer. Mr Cook’s drumming is worthy of a mention as it propels and pulses the songs along in fine fashion. I Spy Punk points were awarded for spotting Jordan in the pit during their set.

Vagaries of economic realities for music venues (i.e. running gigs and club nights on the same evening) meant that tonight’s gig was an early finish which meant openers Janus Stark were on at 6.45pm sharp. Punctuality and early starts are the new Rock N’ Roll!

A large kerrang heralded their arrival on stage whilst I waited for my gobbledegook code to be checked to allow entry into this sweaty Shangri La. However, an early schlep to the outskirts of Brighton beach was rewarded as Janus Stark gave us loud 90s Punk for thirty filled minutes.

Three bands with a shared Punk DNA with a bit of Rock thrown in too. No spring chickens here but plenty of game left in these birds.