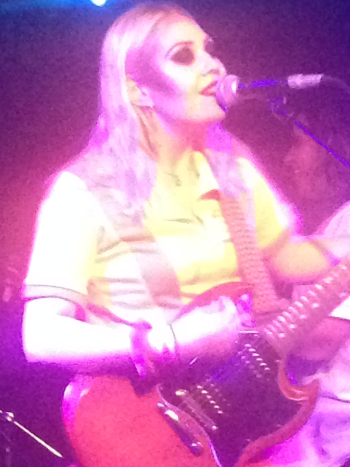 Brighton was awash with ghosts and ghouls for Halloween. Many seemed content to trawl around the city centre pub hopping. Others including myself retained their human form and went to the Komedia on the 31st.

Lauran Hibberd is the drollest and arguably funniest musician on Planet Indie.

Dressed in the costume from her Frankie’s Girlfriend, Lauran was attired for All Hallows Eve. Promoting debut EP, Everything Is Dogs we get all the songs plus vinyl-only exclusive, Camera Shy which unlike most of her most recent material is soft and reflective.

The two big songs in her set are Sugardaddy and Frankie’s Girlfriend. Both showcase her punchy pop indie. Witty and rocks enough with a Pop sensibility to break through to the mainstream. If Lily Allen went Indie if you will.

Musicians could take notes here on how to communicate with your audience. Jokes, anecdotes and surreal observations were all present. 45 minutes came and went in a flash.

Comforts played a retro riffing indie-friendly Britpop set. Close harmonies for the poppier tunes and a harder edge groove for the rockier songs. New to me and converted to the cause.

Trick or treat? A treat most definitely and more indie kids should have forsaken Samhain for this. Even the Grim Reaper himself put in an appearance or failing that a hooded tall hipster did. It was dark…