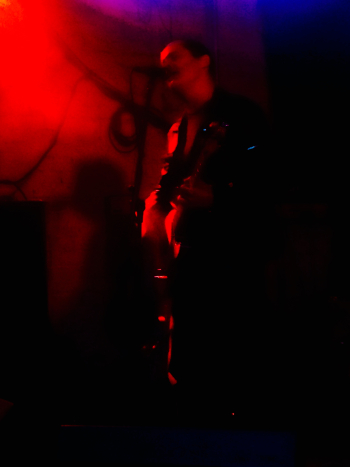 The Night before the General Election.

Party Supporters harassing commuters outside Brighton Station who scuttle away to beat the cold and literature proffered. Under the environs of the station, warm nourishing alternative music is being served. Come inside the Green Door Store, you’ll feel better.

Idle Bones are misnamed in that they are rarely idle. Singles, EPs, videos, gigs… they are always busy.  A Punk meets Rockabilly meets Goth juggernaut.

If you’ve not seen them at a local gig do you go out? Are you sure? Twin guitars and a rhythm section featuring bassist Steve, the most energetic bassist in Brighton and probably Sussex too. How can you resist? In a word, no. Catchy head down million miles per hour songs with catchy hooks and singalong choruses fill their set. Each time I’ve seen them they’ve got better and louder. Need a new favourite punk flavoured band? Try Idle Bones!

Adam & Elvis were new to me. A pop band from Reading with nods to 2 tone and gonzo eighties sounds and a darker underbelly making itself known from time to time. Alternating between female and male lead vocals gives their set a freshness. Something different.

Matt Finucane was the opening act and he was with a band tonight.

Playing material from his recent EP, The Seizure and older material plus a new song we got high-grade alt-rock. Matt’s guitar playing was muscular and twisted whilst the rhythm section kept pace and added to a heavy sound that was tough without being obvious. Art Rock brought into the 21st Century.

Vote for live music. It won’t lie to you and it’s better than another night in front of the idiot box.