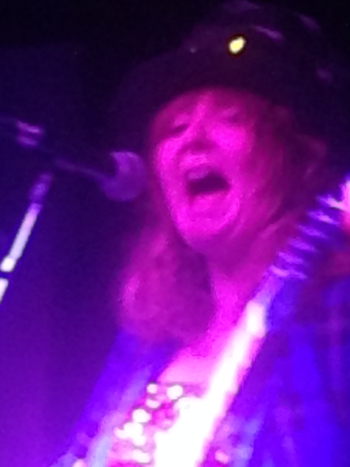 You maybe didn’t know about Slady, the world’s only all-female Slade tribute act. Now you do.

A sold-out Prince Albert on December 13th got their second dose of the band in just over six months. In the time since their last visit, they had gotten better and louder. Led by Gobby Holder they served up an hour of super yobbish glam rock and pop. Ending not with Merry Christmas Everybody, don’t worry they played it, but with Get Down and Get With It which encapsulated all that’s great about Slady.

The sell-out crowd was slightly older and the nostalgia broke in waves of singing, dancing, stomping, and sheer bloody joy.  That’s making you feel like it’s your birthday and Christmas all on the same day. Tribute bands get a bad rap but Slady certainly won’t from those who saw them tonight. Bostin!

Thee Sherbet Peardrop Explosion was the party starters and in lieu of beer and nuts brought fizzy garage covers by the gallon. No cream crackers to go with it but a bit of well-aged cheese via their quips to chew on. Louie, Louie, Stepping Stone and Rumble to name a few of the tunes they played. Job well done.

Slady aren’t just for Christmas but at the end of the year, their glitter shines a little brighter. Christmas 2020 anyone? The Albert again? Paper crowns?