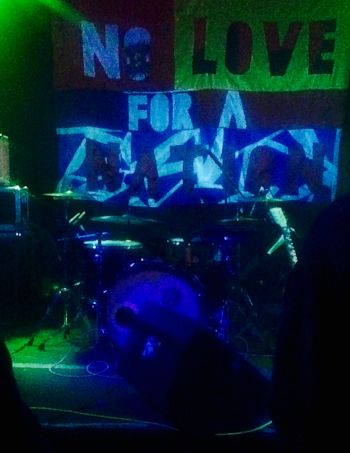 January 15th. Back at The Green Door Store, less than a week after Glitter Piss put on a masterclass of volume and performance. Petrol Girls has rolled into Brighton with locals ARXX in support. What did we get?

Before either band, the stage banner for the night conveyed a message to ponder: No Love For A Nation.

When people of all sizes, shapes and genders came together for this gig, it was worth remembering we are all people who come from the same planet and geography within it means or should mean little. No Love For A Nation but Love For Each Other.

Petrol Girls is a hardcore band. That tells you a partial truth.

A ferocious maelstrom of guitar, bass, drums and voice. Of equal importance, if not more so, is the messaging they convey. Speaking up for space spaces at gigs for non-cis men and asking all to respect this at their own gigs they make the change they want others to make too. They talk eloquently and passionately about respecting and helping others. Music to rage to and words to live by.

Hannah’s voice makes this good band great. Strong and strident but plaintive when needed to, its the third instrument that compliments Hannah’s guitar playing and Clara’s drumming. Playing a thrilling thirty-minute set, we got a modern rock assault that made your bones jolt and your limbs shake with a small country-rock respite towards the end to cool us down a little.

They teased very own headline tour for this year with another Brighton date included. You coming? You should!

Whilst this was a brilliant gig musically more importantly it gave a safe space and platform for those marginalised in society and also within the music scene for a few hours.

Thankyou Dictionary Pudding for putting this show on and Petrol Girls and ARXX for playing. 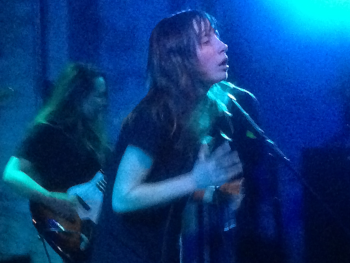