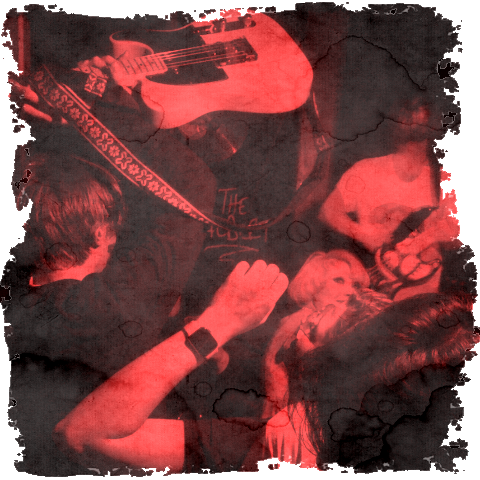 The Albert was crowded with punters trying to get upstairs. A local band sell-out on a Friday night. The kids were right.

Ditz is the noise-punk band of today. Having progressed from early release EP1 to singles such as Total 90 and Gayboy, they’ve taken the crunching pulverising sound evidenced in EP1 and developed a songwriting approach to harness their sonic power whilst telling compelling stories addressing social issues and personal problems. Years of gigging and this show being towards the end of a headlining UK tour meant that the band were raring to go. Singer Cal had a joker style red scar smile smeared across his face. This gave a visual indication of the mayhem that was imminent over the next forty-five minutes.

The pit is the barometer of a good Punk gig and tonight’s was brutal at times. My nose took home a small reminder of it via an interaction between it and a guitar being wielded in the pit. Ditz was more than happy to be in the pit as much as on the stage. The band were malevolent with the quiet-loud-quiet dynamic often to the fore before they set their sound to warp speed and let rip. Their version of Peaches Fuck The Pain Away was aired too. Immense and now signed to Alcopop Records, let’s hope they go far.

Frauds were the Croydon filling in between tonight’s Brighton bands. Small in number, loud in sound. Fat riffs and depth-charge drumming with added surrealist lyrics and stories. The mindset to write a song about how much advertising for the city of Copenhagen had annoyed them gives a little flavour of where they go. A new album on the way too. Frauds by name but not by nature.

Wife Swap USA opened the night and WOW! Taking the best from Aussie shed rockers The Chats and mixing in influences from UK punk from today and yesterday (I could hear Rotten Foxes and Peter And The Test Tube Babies amongst others) we get a heady brew to get drunk on. It’s always a good sign when Jordan is standing next to you and is nodding her head in appreciation. Singer Harry was all you wanted in a punk frontperson. Loud and lewd with a glint in his eye. Songs about losing your virginity, crap jobs, masturbation and drinking are what they specialise in and they do it well. Humour is very evident in their performance but there is a depth to the songs too. Ones to watch and savour.

It’s always pleasing that a band Plugged In Brighton has championed since our inception is on the rise and especially a noise-punk band. No, scrub that, The noise-punk band.